How Long Does Lasik Take From Start To Finish

The lasik procedure is over before you even know it. It takes longer to watch a sitcom on Netflix than it does to have lasik on both eyes.

Overall, it takes approximately 10 to 15 minutes to have lasik performed on both eyes. That’s it! And when you factor in the time necessary to get you ready for surgery, you will only really spend a few hours or less at your lasik surgery appointment.

It is pretty amazing that so much can be done within this short window. So what fills this 10 to 15 minutes?

Breaking Down The Parts Of Lasik

From beginning to end, lasik consists of:

Note: different surgeons will have slightly different techniques which can alter the exact amounts of time 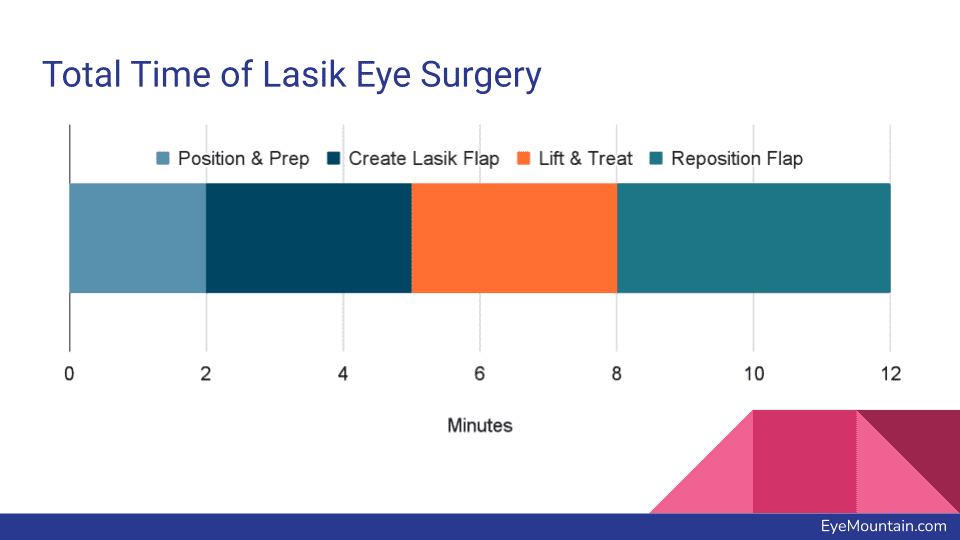 Positioning and Prepping the eye - 2 min

When you enter the lasik suite, you will be directed towards the lasik bed. You will proceed to lie down and your eyes placed in position for the lasik treatment.

Finally, an eyelid holder is placed in between the eyelids to expand them out of the way (note: while lasik is pain-free, occasionally this eyelid holder can be uncomfortable)

Next we move on to creating the lasik flap. Depending on the surgeon’s workflow, both lasik flaps can be created one right after another or lasik can be completed entirely on one eye before the lasik flap is created on the second eye. But in total, this step will take about 3 minutes.

The actual laser time makes up a minority of these 3 minutes.

Lasik flaps are created with something called a femtosecond laser. This laser is capable of generating a laser pulse every millionth of a billionth of a second (every femtosecond). Ie, that’s fast!

This doesn’t mean that the laser treatment completes in less than a second, the laser still must place thousands of pulses to create the smooth and flat lasik flap. But depending on the laser, this laser time will only take 20-30 seconds for each eye.

This laser will actually suction onto the surface of the eye to ensure a centered regular treatment so the remaining time during this step involves cleaning and preparing the eye for the suction and then appropriately centering the lasik flap treatment.

Next up, doing the actual lasik prescription treatment.

Before we correct the vision with the laser, the lasik flap must be folded back. Once again, the surgeon ensures that the surface is clean and dry and then gently folds back the lasik flap. This takes all of 30 to 60 seconds.

Now time for the laser!

In the past, the laser treatment was much longer than what it is now. For what used to take minutes decades ago can now be done in a few seconds with fastest lasik lasers available today.

Alcon’s Wavelight EX500, used for Contoura topography-guided and wavefront-optimized treatments, can place 500 laser pulses a second! At this speed, a -3.00 prescription can be treated in just over 5 seconds. Higher prescriptions and more astigmatism mean a slightly longer treatment but it is very rare for any treatment to exceed 20 seconds. The VISX Star S4 IR laser, used for wavefront-guided treatments is a little bit slower, but still faster than the conventional lasers used decades ago.

Check out Finally Make Sense of All The Different Types Of Lasik on EyeMountain.com to learn more about the different lasers.

The lasik flap was created and the prescription was treated with the lasik laser. So what’s left?

The last parts of the procedure simply involve placing the lasik flap back in place. Seems straightforward enough.

When replacing the lasik flap, the surgeon will ensure that:

In fact, this section of lasik will have the most variability of technique and time between surgeons. Thus, for some this section can take about 3 min total, for others, this may take about 5 min total for both eyes.

Add in about another minute to take out the eyelid holder and sit you up from the lasik bed and you have the compete lasik treatment.

Check out this video to see those last two steps in action:

What Can Add Additional Time To The Treatment?

All above is the fastest route to getting lasik done. But like with any other procedure, certain things can slow lasik down.

Even in spite of some of those extra delays, the whole lasik procedure still is very short.

Time Before And After Lasik

While the lasik procedure is short, plan to spend some extra time in the surgeon’s office before and after the laser eye surgery. This extra time can add anywhere between one to two hours of total time commitment.

After you check in with the receptionist, a few things may happen before your lasik procedure.

And after the procedure a few more things are accomplished

A lot of prep-work goes into your lasik procedure. And lasik clinics are tightly choreographed to efficiently perform all these extra steps. But still be prepared to spend some extra time at the office outside of the actual lasik procedure.

Lasik doesn’t really take all that long. In less than 15 minutes, you can get the prescription of your eyes corrected and get rid of glasses and contact lenses.

When Does The Corneal Flap Heal After Lasik?

It isn’t natural to have a flap within the cornea. That’s not how we were born…

What Can You See During Lasik?

Getting your vision corrected with lasik can be a very exciting time. But at the…
Previous ArticleNext Article