Finally Make Sense of All The Different Types Of Lasik

Modern lasik takes advantage of the femtosecond laser to create the lasik flap. This is contrast to older types of lasik that use a blade. Different treatment methods exist to perform the prescription correction. These are known as wavefront-optimized, wavefront-guided and the newest and perhaps the most optimal, topography-guided treatments.

There are two main parts to lasik:

Let's look at the distinct types of lasik for those two steps.

Lasik treatments are performed in the structural framework part of the cornea called the stroma. However, this stroma is covered by another layer on top called epithelium. We could brush off that epithelium to get down to the stroma for a treatment, but that would be called a different procedure - photorefractive keratectomy or PRK for short. Lasik does something different, it creates a window or flap to expose the stroma for treatment; compared to PRK, this improves the recovery time for lasik.

Back in the day, lasik flaps were created using blades - called a microkeratome. While it sounds dangerous, microkeratomes weren't terrible. (after-all, if they were terrible, lasik wouldn't have caught on as a great way to correct vision).

The instrument was calibrated to cut at a certain depth across the cornea. This created a regular two-dimensional cut within the cornea - creating a flap.

The advantage of the microkeratome is that it is cheap. Compared to lasers (which we'll get to in a second), the surgeon buys the microkeratome once and doesn't have to pay any additional costs to the manufacturer to use it.

As technology improved, femtosecond lasers were developed which could create the lasik flap. Each pulse of this laser creates a microscopic air bubble pocket. These pockets are placed immediately adjacent to each other in the shape of a lasik flap. Following the treatment, the surgeon manually divides the final remaining connection between the tiny pockets to fold back the lasik flap for the treatment.

Popular femtosecond laser platforms for lasik include the iFS Intralase by Johnson & Johnson, the Wavelight FS200 by Alcon and the FEMTO LDV by Ziemer

Laser created lasik flaps offer significant advantages over microkeratomes (even despite the fact that each laser treatment has an additional cost, called a “click fee” that goes to the manufacturer).

The addition of femtosecond lasers dramatically changed lasik and is very much worth the small extra cost that goes back to the manufacturer. (supporting future innovation perhaps?)

Here's where things can get a little more confusing. There are multiple different technologies that are all competing to perform the best treatment. Unlike laser vs blade (which hopefully you've reached a clear conclusion), the uniform consensus on which is the best laser platform is a little more murky. Hint: all the most modern ways of doing a lasik correction work very good; but some do perform slightly better than others.

But first, a background on how lasik works

The prescription treatment during lasik is performed with an excimer laser. Each pulse of this laser shines on the stroma and is designed to remove microns of cornea tissue. The goal of all this is to change the shape of the cornea.

The cornea is responsible for approximately 2/3 of the prescription of the eye. For someone who is nearsighted, light doesn't focus properly on the retina. In particular, light focuses in front of their retina; their cornea bends and focuses light too much.

By flattening the cornea of someone who is nearsighted, light won't focus as much and will reach the retina completely in focus.

Let's start with conventional. This isn't considered one of the modern ways of doing lasik. This was the original way lasik treatments were performed.

Like the exact description on how lasik works, these lasers used very broad beams of excimer laser energy to flatten the center of the cornea.

But even despite that, conventional lasik treatments were revolutionary for the time.

Why would some still perform conventional treatments? Well, for one, lasik lasers are expensive. If the practice doesn't do a high enough volume of lasik, then economically it may not make sense to upgrade to a modern version. In addition, similar to how the femtosecond laser has a "click fee" that goes to the manufacturer for each use of the laser, all modern lasers have these extra fees as well. But some of the older conventional lasik lasers existed before this trend began and thus lasik treatments can be performed at a lower cost.

How can we improve upon conventional treatments? Well, keeping the cornea more uniform would help. This is what wavefront-optimized treatments are designed to do.

The Wavelight Allegretto Eye-Q introduced in the United States in 2006 and later replaced by the Wavelight EX500 in 2016 are some of the popular lasik lasers using wavefront-optimized treatments. 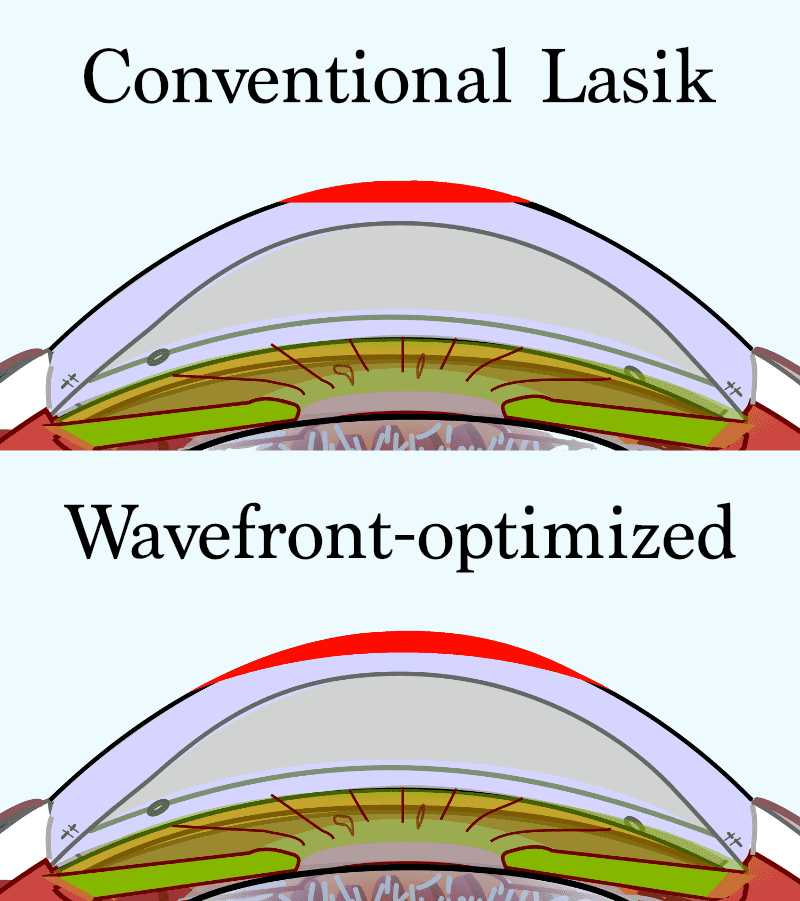 Some laser manufacturers took a different strategy to correct vision and reduce the spherical aberration induced by conventional lasik. (and even attempt to reduce even more distortions in vision). This led to the development of wavefront-guided treatments.

Prior to lasik, the eye is measured with a special machine called an aberrometer. This machine shines light into the eye and measures its return after the light bounces off the retina in the back of the eye. This can measure the prescription of the eye and also measure extra distortions, called higher order aberrations in vision.

Aside to learn about higher order aberrations:

Wavefront-guided treatments take all this visual information from the aberrometer and uses it to calculate a treatment to correct not only the prescription, but also the higher order aberrations in the eye as well. Thus, it can treat things which glasses can't even treat.

Unlike wavefront-optimized treatments, wavefront-guided treatments require an aberrometer. The VISX WaveScan CustomVue received FDA approval in 2005 which has since been improved to the iDESIGN in 2019

The cornea can be mapped out - this is called topography. This map can tell us not only how much astigmatism there is on the cornea but also what higher order aberrations are coming from the cornea.

Once we have a map of the cornea, we can program the laser correction to eliminate the asymmetry in the cornea to correct corneal higher order aberrations at the same time as correcting prescription. Again, like wavefront-guided treatments, potentially improving vision from what glasses can do.

Contoura is a popular method for topography-guided treatments in the United States and became available in 2015.

Contoura is used with the EX500 laser. Sound familiar? This is the same laser used for wavefront-optimized treatments. The same laser can be programmed for Contoura topography-guided treatments (with an additional “click fee” cost above the normal one to the manufacturer, of coure; and also as long as cornea measurements were performed by the Wavelight Vario Topolyzer topography machine prior).

But because the EX500 is used, wavefront-optimized principles are applied to the topography-guided treatment to create as smooth of cornea as needed for optimal vision.

So Which Is Best?

In reality you can't go wrong with either of the modern lasik treatments. Wavefront-optimized, wavefront-guided, and topography-guided treatments all work very similarly to correct vision. (in fact, visiting an experienced lasik surgeon may make a bigger difference in outcome).

But of course, you want to know the best!

However, the aberrometer machine used for wavefront-guided treatments became more advanced. This allowed the aberrometer to measure the eye better than the older technology. And this actually changed outcomes!

While the vision acuity (the ability to read letters on an eye chart) between the two treatments was still the same, the upgraded machine allowed wavefront-guided treatments to have slightly better ability to see differences in shades of light and dark, known as contrast sensitivity. This can potentially improve vision in low light scenarios. Still very similar but a slight edge to wavefront-guided treatments.

Starting in 2019, the Phorcides Analytical Engine was created to assess the impact these corneal aberrations have on prescription. Adjustments are made to the treated prescription in order to improve the accuracy of topography guided treatments. This has improved the ability of topography-guided treatments to provide sharper vision. After topography-guided lasik with Contoura and Phorcides, over a third of patients will see better without glasses than they ever saw with glasses.

While there are clear differences in the type of lasik when it comes to the creation of the lasik flap, there is less dominance when it comes to the type of laser used to perform the actual prescription treatment. All things being equal, topography-guided lasik has the potential to perform slightly better than wavefront-guided and wavefront-optimized treatments. But either way, today's lasik works extremely well to correct your vision and get you out of glasses and contact lenses.

The FACTS on How Long Does Lasik Last

Lasik permanently changes the cornea. Thus, it lasts forever right? Yes and no…

What Can You See During Lasik?

Getting your vision corrected with lasik can be a very exciting time. But at the…
Previous ArticleNext Article