But what counts as a significant amount of astigmatism? What even exactly is astigmatism? Let's delve into the numbers!

There are two main prescription errors which can cause you to have blurry vision.

Not all astigmatism is equal. Even a slight football shape to the cornea technically causes astigmatism. But this astigmatism may blur vision very little. This would be a very low power of astigmatism.

A low power of astigmatism is generally thought of as anything less than 1.00. Anything above this value starts to cause more issues with vision.

How often does astigmatism occur

Because astigmatism can exists in very small amounts, astigmatism ends up being very common. Large population studies have demonstrated that 63% of young adults have some amount of astigmatism! 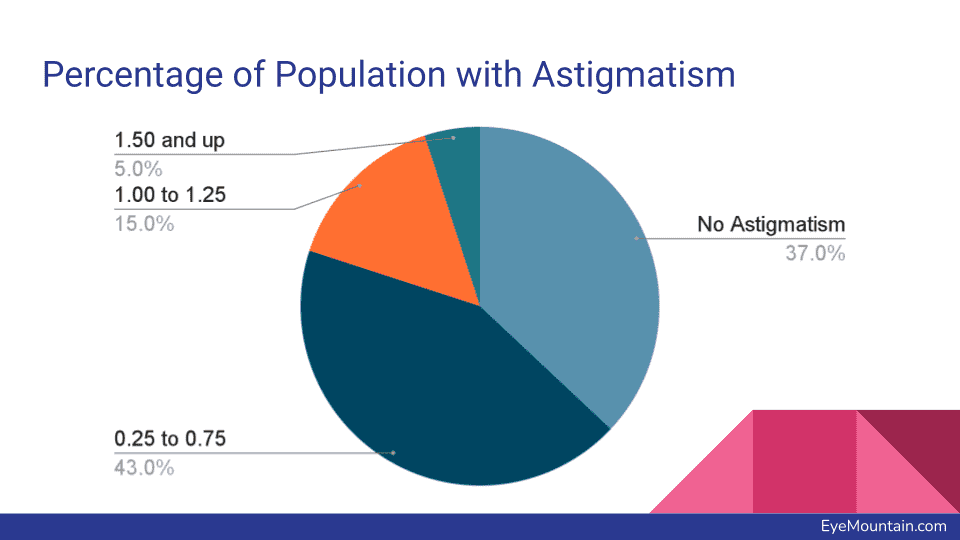 These large population studies, however, mostly involved adults. But astigmatism changes throughout our life.

However, children with high amounts of astigmatism are at risk for losing vision. Up until the age of 12, the vision is constantly developing. These ages are called the critical period for vision. It is essential during these years to have good vision so that good vision develops.

High astigmatism will cause blurry and poor vision. If this blurry vision is not corrected with glasses, good vision will not develop. This is called amblyopia. From birth through childhood, it is important to continually screen children for astigmatism to allow for the healthiest development of the eyes.

But after our vision develops through childhood, astigmatism remains relatively stable until our late-adult years. Once we pass through our 40s, as our eyes and cornea change, our astigmatism can continue to change. Our astigmatism can get smaller, disappear, change direction and then grow larger again. Even if you never had astigmatism before, you can potentially develop a little as your cornea changes with age.

In general, East Asians, Hispanics and Native Americans are more likely to have astigmatism. The percentage of those with significant astigmatism in these populations can be almost 2 or 3 times greater than the general population!

People with astigmatism are more likely to be near-sighted than the rest of the population. As you increase the amount of astigmatism, this increases the chance that you are also nearsighted.

This association has been studied in children. In children with astigmatism, the more astigmatism they had, the greater amount of near-sightedness that developed over time.

The relationship between astigmatism isn't fully understood. But it is hypothesized that blurry vision from astigmatism in a developing eye serves as a trigger for more near-sightedness to develop.

Astigmatism can blur your vision. This in itself is frustrating to deal with…

Will Astigmatism Cause Double Vision?

Astigmatism remains one of the most misunderstood eye conditions. Untreated…
Previous ArticleNext Article