How Do Eyes Look Different After Cataract Surgery

Very few surgeries have zero changes in outward appearance. Most surgeries are at least going to leave a scar. (Granted, in many cases the incision and resulting scar can be small and hidden out of the way.)

In general, the appearance of the eyes doesn’t change much after cataract surgery. However, if you look close enough, you may see a glimmer of a reflection off of the newly placed artificial lens in the eye. Beyond that, there isn’t much different; except the eyes may be more red initially after surgery.

Some describe this glimmer or reflection as glassy eyes or as looking like a cat’s reflex or even the eye of terminator. But what is actually going on here?

Before your cataract was a cataract, it was just simply called your lens. This lens was responsible for one third of the ability of the eye to focus light. This job must be replaced after the cataract is removed.

These artificial lenses are very safe and effective. And manufacturers have figured out advanced ways to get out of glasses with these lenses. (See also Your Complete Guide Of Lenses For Cataract Surgery). But these lenses are still artificial within our eye. Thus they can have some unusual effects that your own natural lens didn’t have.

The glimmer after cataract surgery is one such effect.

Note the multiple reflections of light within the pupil due to the artificial lens. These reflections change as the eye moves around.

But not all cataract lenses glimmer the same way. The amount of reflection of light off the surface of the lens depends upon the how flat the shape of the lens is which itself depends on how much the lens bends light. Knowing this information can help determine which lenses glimmer more than others.

Refractive Index (How Much A Lens Bends Light)

Let's talk a little bit about the physics of light. Wait, don't tune out just yet!

When light passes from air into something, light bends. Lenses take advantage of this property to bend light into focus.

Light bending when passing from air into glass; Image by ajizai, Public domain, via Wikimedia Commons 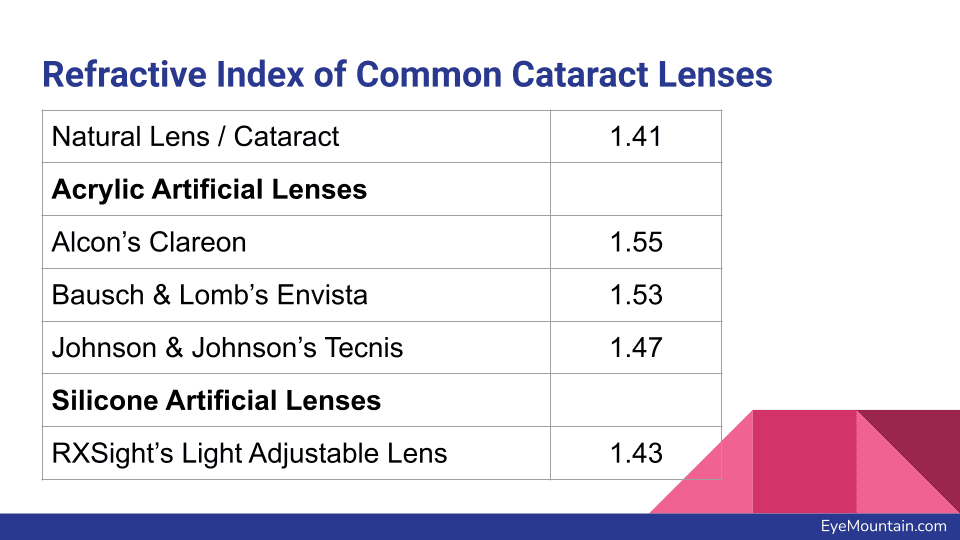 Thus, to focus light the same way, lenses that have a higher refractive index must be made slightly more flat. This causes the lens to reflect more light off of the surface.

TLDR: Artificial lenses that have a higher refractive index have more of the glimmer effect after cataract surgery.

Some artificial lenses, such as the light adjustable lens, a silicone based lens, and the tecnis lens, have less glimmer. While certain acrylic lenses, including the clareon lens have more reflections of the surface of the lens.

But Does This All Matter?

Having reflections off the surface of the lens and causing a slight glimmer has no significant effect on vision. The different artificial lenses after cataract surgery still work very well regardless of how much they reflect light.

The main effect is a slight change in the outward appearance of the eye. Instead of having a perfectly dark pupil, occasionally the pupil will be illuminated by light from the reflection.

However, if the glimmer is a concern, asking your surgeon about lenses with a lower refractive index can help reduce that effect.

Other Ways The Eye Can Look Different

Some of the red appearance after cataract surgery may be due to small bruises underneath the surface of the conjunctiva (the white part of the eye). Underneath the conjunctiva are tiny blood vessels. Some of these blood vessels may break from some of the instruments used during cataract surgery (especially if a laser is used for cataract surgery). This is referred to a subconjunctival hemorrhage. This makes the eye appear very red (even more so if you are on any aspirin or blood thinners). And it will take at least a few weeks for this redness to go away.

But even without these bruises, the eye can still appear slightly more red than usual. After cataract surgery, there is slightly more inflammation and irritation on the surface of the eye. Like anything else that’s irritated, the eye turns more red. Taking your prescribed drops after cataract surgery helps the eye heal over time allowing this redness to fade away. Using preservative free artificial tears can also help speed up the resolution.

The main way that eyes can look different after cataract surgery is through the presence of a subtle reflection or glimmer off of the newly placed lens. This glimmer is caused by the difference in shape between the artificial lens and our own natural lens. Depending on the material, some lenses will have more of this reflection than others.

This Is Your Vision Before And After Cataract Surgery

About How Long After Cataract Surgery Can You Drive?